This article titled "The Worst Predictions About 2008" could be a warning to greed, or those who think they have tools to predict and play god:
http://www.businessweek.com/bwdaily/dnflash/content/dec2008/db20081224_028134.htm

I guess the market works because there are always people who think they could beat the system.
I wonder if any columnist or staff writer made any "way-off" during 2008 as well?
Publié par Asian Guy à l'adresse 1:12 am No comments: So the European Film Fest finally ended and I am posting a long entry regarding the films I watched. There are another 5 or 6 films that I missed because of scheduling or other constrains. 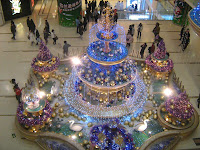 So with Christmas around the corner, do you think about the carbon emission increased, indirectly of the extra food or products consumed? For example the CO2 emission from shipping some exortic delicacy across the Pacific Ocean? For Hong Kong, I guess it is the lightings - from the skycrapers dotting both sides of the Victoria Harbour to just ordinary residential or commercial buildings in your neck of the woods. We better catch up before the whole of China has that kind of light pollution like in Hong Kong. You don't believe it? The pics in this post are taken in Beijing, and these installations are growing everywhere.

So I was supposed to watch another film in the European Film Fest. However there were so many people that by the time I arrived all the free passes were gone. I put my name down on the waiting list but went immediately instead to the 3rd Colombian Film Season (dunno really how to translate into English, well you can see the logo attached).

It was a film, quite harliriously titled La ministra inmoral (Immoral Minister). Its elements were quite sterotypically South American - sexy women, casanova type men, sex, violence, etc. I thought I was watching soap on Telemundo back in New York City hahaha. The representative (probably from the Colombian Embassy) was very courteous and spoke Mandarin. What foreigners who worked long enough in Beijing would NOT speak Mandarin anyways? They don't want to be uncool hahaha. With the screenings, it is a good way for Beijingers to get a glims of the country literally half a world away, though the imageries and perceptions might be distorted a little.
Publié par Asian Guy à l'adresse 3:09 pm No comments:

So another conference I attended, this tme with a professor at the famous Sciences Po . It was an interesting talk because the speaker had training in philosophy and did research on anthropology and has been looking at the intersection of the above disciplines with science. It really brings back to my days of taking philosophy courses at Stony Brook. The topic is strange for me, for I ain't no academic nor am I well-read in philosophy. I hardly scratched the surface of that field as an undergrad. However, if only people interested and who understand this kinda difficult discourse can put it in layman's terms for the general public, perhaps it would just able to help lessen or prevent some of the messes coming out of the current financial crisis, such as the massive Ponzi-styled fraud, of all people, a former director of NASDAQ Bernard Madoff... yikes! It reminds me of Henry George too, do we REALLY have progess, then why do we still have poverty?

While I was researching online for Bioinformatics stuff, I came across the Sept 2008 issue of Nature with a catchy title - Science in the petabyte era. I remember writing some essays, when I was a kid in secondary school, for several U.S. college entrance applications, in which I used, dunno if I coined LOL, the term "knowledge explosion". I guess the trend has continued. Nature remained us Google celebrated its ten anniversary this year. Biology, biological sciences, etc. - similar entities to the layperson unless you work in the specific fields - have been evolving from purely descriptive science to more and more quantitative disciplines such as bioinformatics, genomics, proteomics, etc. Biological processes, molecular compounds can now be more mathematically described or tracked.

Back when I was an undergrad, circa early 1990s, many of the fields did not take any shape yet. Certainly a lot has changed over twenty years. At one point, I wanted to pursue a Master degree in Bioinformatics. Now, however, it will be extremely fascinating to stay on as an informed amateur, to witness the changes these computational, as well as the traditional biochemical tools coming to play and create knowledge and discoveries.
Publié par Asian Guy à l'adresse 4:15 am No comments:

I had the opportunity to watch three documentaries:
La Liste de Carla - on the former prosecutor of International Criminal Tribunal for the former Yugoslavia (ICTY)

Un abolitionniste - The French Justices Minister Robert Badinter, when death penalty was abolished in that country.

I named the films in increasing level of personal interest. Three documentaries and three entirely different topics at individual, regional, national and international level. We are still living in an imperfect world. At times, even international efforts, or the lack of, as in the case of the ICTY, cannot bring justice to past wrongs. As with many other social justice issues, such as environment, it takes organisation, mobilisation and education at local level to achieve a fairer society for all.

Check out the office of the Higher Commissioner of Human Rights, if that interests you.

On second thought, I think globalisation and borderless markets and business opportunities bring out challenges that aren't discussed when we talk about human rights. What about the children working in the developing world to churn out your Christmas toys and gifts that you give to your kids and friends? Or did you ever wonder why stuff are so cheap at the dollar store? There is the market in demand, even with the current financial crisis, and the supply of labour. The topic does go beyond death panalty, torture, etc. the obvious to more subtle areas.

China, a hot zone whenever people talk about human rights, will face its own challenges, as mentioned in the Chinese edition of the Wall Street Journal.
Publié par Asian Guy à l'adresse 2:17 pm 1 comment: 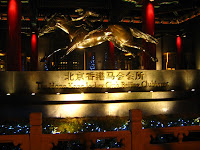 Ahh... the club house of Hong Kong Jockey Club in Beijing, just East of WangFuJing王府井. My late night discovery as I was walking to a friend's home last weekend. It looks new and like a hotel. And it has Christmas lightings too! 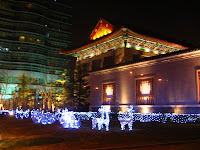 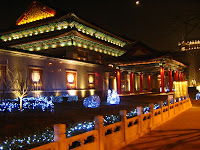 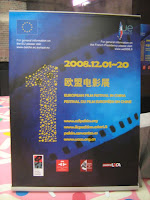 Well, if you walk around town, at least the CBD or more of the area inside 2nd ring road, you will notice more and more tell-tale signs of the holiday season (in Western or American terminology, since it is not quite a holiday in mainland China). Notwithstanding, businesses, especially hotels and restaurants are more than happy to embrace it. 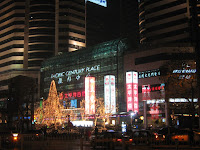 Apart from my earlier entry on Las Hurdes. I watched a few Buñuel flicks lately. One of them was Un Chien Andalou, which after the second or third viewing, I still cannot make out of every message the film meant to convey. Do I really have to "understand" what the film director intended for us to see, given the name Luis Buñuel equates surrealism? I have heard more than once that movies, when compared to books, make people dumber because the former is "fed" to the audience, whilst reading a book allows room for individual interpretations. Well, An Andalusian Dog really leaves us lots of room to dream on. It is entertaining to say the least!

九巴的70號巴士停駛了。這也可以說是我的童年回憶隨著都市的步伐加快而停止。其實在我讀中學的八十年代，70號的影響力已經開始放慢。那時吐露港公路剛剛啟用，快線的巴士服務漸漸搶走乘客，但是最主要的原因是火車的電氣化計劃。從1983開始，火車慢慢把新界與九龍的距離拉近。從前花一個多小時的車程縮短為三十六分鐘左右。見新聞報道 和 背景資料 或另一個寫得很詳細的博客。 So a bus route that sort of grew up with me, or vice versa is no more. Blame it on the increasing fast pace of city life in Hong Kong. The trip on No. 70 has a lot of personal spin to it. In the past my family, more often my father and I would ride from terminus to terminus (Jordan Road in Kowloon and Sheung Shui in the New Territories). Withchanging pace in Hong Kong at lightning speed, it is actually quite amazing the No. 70 bus survived so long. When I was studying in Mong Kok and living in Sheung Shui from 1984 to 1987, I took the bus sometimes, just for the fun of it, even though the train would get me home in like 40 minutes. In the very old days, early 1980s in Sheung Shui, buses arriving would have to turned onto the opposite lane and back into the "parking lot" which looked more like just a dirt pit, as it wasn't even paved with cement.

I guess the bus route witness the changing of population density, neighbourhoods, sceneries, etc. I always thought it was the longest bus route in Hong Kong, the trip itself was something, not quite a pilgrimage, but long, taking at times one and a half hours with traffic LOL. Now that it had served it purpose, like many aspects of life Hong Kong, exists only in our memories and contributes to the ever growing nostalgia. Some blog pictures on the buses are here.
Publié par Asian Guy à l'adresse 11:54 pm No comments:


I went to this funky party last Saturday in a warehouse on 王庄路 Wang Zhuang Lu in Beijing's WuDaoKou district, a primarily university district. The warehouse seems to be a 武术学校 (school of Wushu) during the day. 在这个派对里遇上一些法国人，其中还有几个华裔的法国人。他们大部分都是学生，有一些是来北京学汉语的，另外一些则是MBA的交换生。这又是一个外国人对中国越来越感兴趣的例子。 Alors cette soirée me démontrait que ma théorie reste correcte - je peux améliorer mon français bien que j'habite à Pékin, grâce aux francophones qui s'installent ici, temporairement ou à long terme.
There were DJs playing music, graffiti artists spray-painting the wall, people busying barbequing, eating and drinking. Interestingly, I dunno if I were the only one noticing, a few mingong not associated with the party actually sneeked in and out of the premise a few times. Things happened at these kidna evnets you know. The bottom line was everyone had a hell of a good time without any ruckus!
Publié par Asian Guy à l'adresse 2:45 pm No comments:

one of the points of view on the issue, from Deepak Chopra